Three students were sentenced to prison for three years 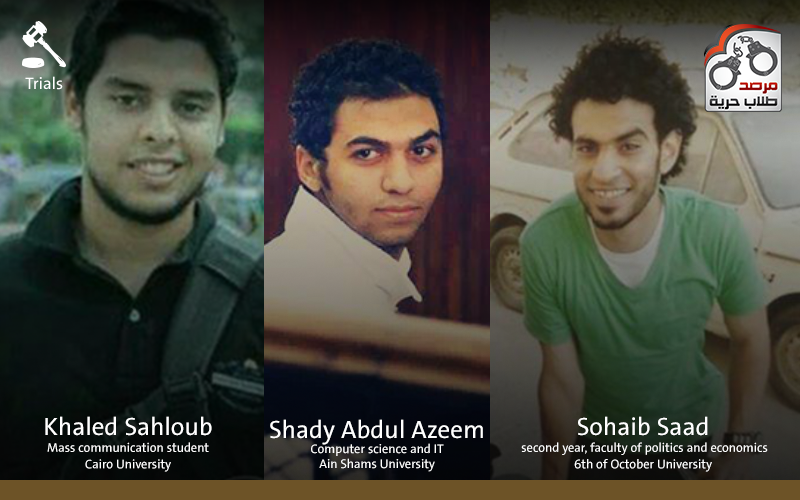 The Cairo Criminal Court has sentenced each of “Khalid Mohammad Abdelra’ouf, who is known as

Mohammad Mohammad, the student at the second stage of Political and Economical Sciences, 6th of October University and Shady Abdulazeem who made his bachelor degree in faculty of Information and

Technology” to prison for three years.

28/6/2015 and they were re- trialed under the background of many charges including ; joining a

banned group, preventing the government from doing its jobs, violation of the citizens’ personal

freedom, targeting the public foundations, doing damage to the national unity and the social peace

and putting the social safety on the line.

26/2/2015 except the student Khalid Sahloub who was kept in detention under other charges.

It was also mentioned that this was the second time for detaining the student Sohaib Saad, who

was arbitrary detained on 1/6/2015 from the area of Almaadi shore, where he was led to unknown

place and kept forcibly hidden for more than two weeks. The thing that violates the first subject of the

states that “It is forbidden to forcibly hide any human being.”

According to what the students’ families mentioned; all of the three students were exposed to the

their detention while they were imprisoned in Almoqatam police station in January, 2014. They stayed

in the police station before they got their eyes covered, then, they stayed under the enforced

violates the law. The forces did that deliberately to force them to admit that they were working for

Marriot cell in media. After that, they were moved to the strictly guarded prison ‘Alaqrab’ (the