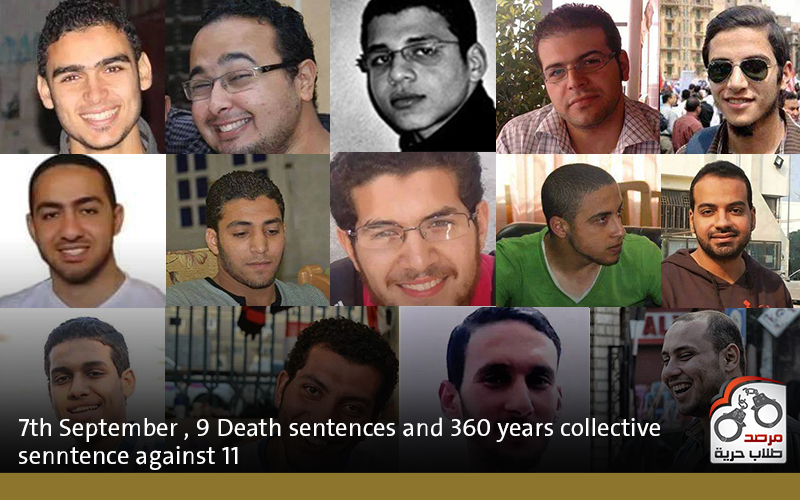 Mansoura Criminal Court held under the chairmanship Chancellor, “Osama Abdul Zahir” ruled Today Monday, 07/09/2015, sentencing on 24 defendants, including 22 in presence, referring 10 of them to the Mufti, on 9th of July, including 9 in presence, and today the Mufti ratified the death sentence of 9 of them, including 8 in presence, and sentenced 14 defendants to life imprisonment, also a student were sentenced in absentia to prison for 10 years, in the well-known case in the media which is “the killing of the guard” restricted No. 781 for the year 2014 South Mansoura ,year 2014 criminal Supreme State Security.

and Another in absentia.

While the death sentence was commuted to life imprisonment on “Ayman Abu Emsan.”

It is noteworthy that the security forces had arrested the defendants arbitrarily contrary to the law without permission or a court order reasoned arrest, in early March 2014 from various places, where they were taken Unknown places to any of their relatives or their lawyers, where they were forced to hide for different periods, proved later, according to the response from the people their exposure  to severe torture at the headquarters of the National Security, to force them to confess to charges of security agencies did not provide objective evidence confirming the conviction on the students,later a number of students were shown in a video clip image that was released by the Interior Ministry, where they appeared with swollen faces, clothes torn and wounds that did not heal yet, to make an explicit confession of having committed several crimes, most notably killing of Sergeant Directorate of Dakahlia.

Despite what the students sad to the public prosecutor that the confessions were made of them was under severe torture, but the prosecutor did not bother or even asked for a forensic investigation of the crimes of torture that took place against them, but accused them directly to several charges, notably: the killing of “Abdullah Abdullah Metwally, “a guard member of the form of the trial of former President Mohamed Morsi, possession of explosives and weapons, joining a banned group founded against the law, joining a terrorist group calling for atonement, and then ordered directly for imprisonment pending investigations of the charges against them, then their referral to the criminal court on Sunday, 06/15/2014.

In spite of the scores that issue almost non-existent, in addition to the lawyer to prove the invalidity of the students most of the evidence, but the Mansoura Criminal headed by Judge “Osama Zahir” ruled to refer the papers to the Mufti and the ratification of the execution sentence in the case.