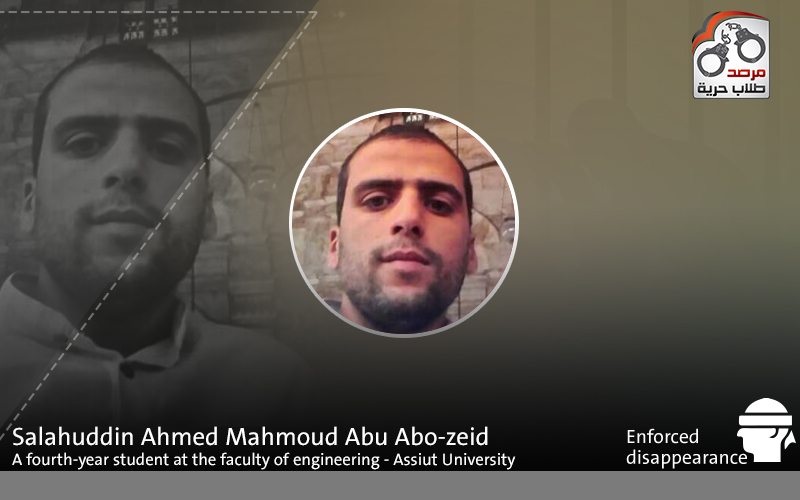 Egyptian security services continue to conceal the place of, “Salahuddin Ahmed Mahmoud Abu Zeid,” the fourth-year student at the Faculty of Engineering, Assiut University, which the University that dismissed him arbitrarily earlier because of his political background. A random ambush arrested Salah on the Cairo-Suez road in Sunday evening on July 24, 2016.

“Salahuddin” family reported that their son phoned them- before his phone was stripped- in Sunday evening and told them that he had been arrested in a random ambush on Suez Road and the security forces detected his personal card electronically, and they found an absentia judgment for three years.

Security forces arrested him and detained him at the police station in Badr city, that was reported by his friend who went to the station in trying to set a date for a visit to Salah.

The visit has already identified, but then it had been cancelled, and his friend wasn`t able to visit him.

According to his collogues, the security forces raided the house- that “Salah” shared them in -to take their personal cards. Salah`s collogues added that they had seen “Salahuddin” inside the police car. Since that time any of his family or his colleagues or his lawyers find out any information about his fate or whereabouts. The police station denied his existence and he wasn`t presented to the Prosecution until now.

In a related context, the student`s family said that they had sent several Telegraphs and reports to the public prosecutor to look into the issue of their son hide and to reveal his whereabouts but they hadn`t got any response yet.

The family fears that their son may be subjected to any force or torture because they until this moment unaware of his fate .