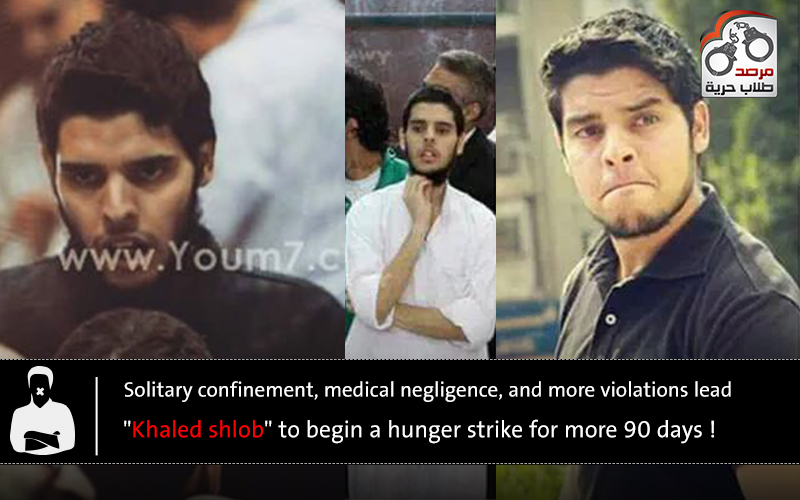 “Khalid Mohammed Abdel Raouf Sahlob” alias “Khalid Sahlob”, a student at the Faculty of Media, Cairo University is on hunger strike since 136 days.

Sahlop`s family said that their son is detained in a disciplinary cell in “Al-Akrab prison” since early August, the family added that their son is exposed inside his solitary confinement cell for all types of torture, such as electric shocks, beating, insult, and physical and psychological abuses. Because of the torture increasing he was rushed to the hospital and where he remained for three days before he was came out of the hospital on the fourth of August and was returned to his cell in “Al-Akrab” prison.

Sahlop suffers from a drop in the blood sugar, which reached 15 and from a daily syncope. He also suffers from severe pain in his stomach because of the ulcers that hit him during the strike. Despite of that, the prison administration is stubborn with the student, rejected to take him to the hospital, and also prevent the visits to the student, and the entry of medicines and clothes to him. In the last session Sahlop told his family in a letter that the prison administration deals him harshly and assaults on him as a daily basis that would lead him to death. Student`s sister said that the prison warden threatened him and told him: “I can kill you and write in the death certificate that you died by a decline in circulation”.

Sahlob`s sister said that new news reached the family on Wednesday morning, July 20, 2016 that reported that he was transferred yesterday suddenly from the headquarters of his detention in “AL-Akrab prison” to “Leman Tora hospital” because of the sharp decrease in the level of sugar in the blood and the deterioration of his health and the Prison administration couldn’t deal well with his health condition. When Sahlop`s family went to “Leman hospital”, they knew that he had been moved to “AL-kasr Alini” hospital in Cairo so that the family was not able to see their son or reassuring him.

Sahlop`s family emphasizes that today is the day number “136th” since the student entered into a full hunger-strike to protest against the very poor and inhumane conditions of detention since the start of his detention until today. What Sahlop was suffered from causing weakness and a drop in blood circulation, and he suffers from a stomach ulcer and his therapy was prevented from entry to him, also he was suffering from pain in the knee and back. Although his family offers a request to the prison administration to make rays ring on the back area, but the prison administration rejected the request. Despite the confirmation of the doctor on the student`s need to stay in the hospital and his need for solutions and monitoring continuously, the prison administration refused and forced him to return to his cell again, what caused the outcome of the state of his health today.

For The reasons of student`s hunger-strike, his sister had reported that her brother had lost weight eerily, he lost at least 40 kg of weight since his arrest in addition to increasing his body pains, where he was suffering from pain in the back, knees, spine bone on his feet in addition to dental pain, all exacerbated by the lack of movement and lack of exposure to sunlight, where he is forbidden to get out of his cell.

Sahlop`s sister added that the food is offered to him is little and have poor quality, in addition to what is known as the “canteen”_ a small market in a prison_, is closed most days, and the prison administration prevented families from visiting the prisoners for long periods and when Visits opening, they allow only a very small food quantity not exceeding two spoons and a half of rice and a small piece of meat and also a small amount of therapy. The Prison administration ignored the applications submitted by Sahlop`s family that demand a detection, x-rays and physical therapy, that ignoring led him to open the full hunger-strike until they transfer him from which he called “AL-Akrab graveyard”.

Stated that “Sahlop” faces imprisonment for three years on charges with other in the issue which known in media as the ” Marriott cell” where the judgment was issued against “Sahlop” and other students in the day 23/06/2014 rigorous imprisonment for seven years and has been re-trial on the background of being accused of several charges, including: joining a group founded at odds with the law, preventing state institutions from exercising their work, the attack on the personal freedom of citizens, harming national unity and social peace, targeting public facilities, and endangering the safety and security of society at risk.

It is reported that on Thursday, 02.21.2015, has issued a decision to release the students, so as by guarantee their place of residence, where they all were released except “Khaled Sahlob” who continued detention pending the issue which known in media as the “Brigades of Helwan”,it is noteworthy that this case has happened during his presence in prison.

In its response to what was attributed to their son, student’s family has denounced about the accusations made against him and degrading treatment by saying that “Sahlop” not a criminal, he only is a journalist and he is practicing his profession with honor and “journalism is not a crime!”.

Sahlob`s family has demanded to transfer their son from “AL-Akrab notorious prison” -as their said- and even detained in a hospital until being fully treated.
The family also bears responsibility for current Egyptian authority and the Interior Ministry with life of their son and his safety.