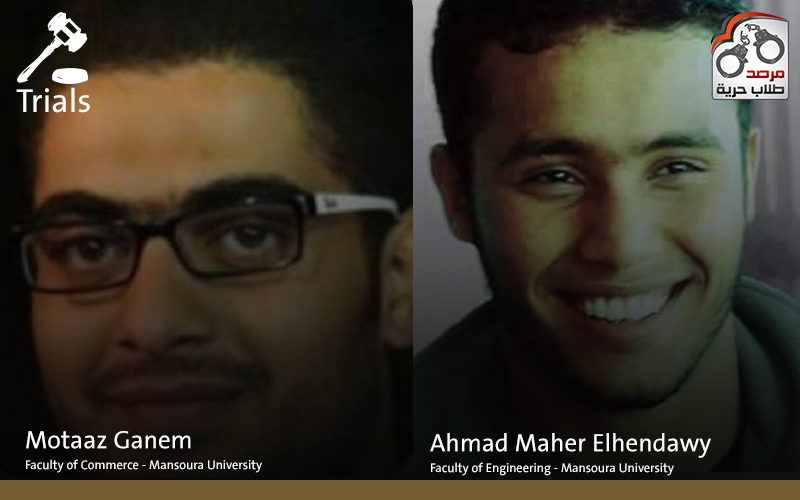 Mansoura Criminal Court decided yesterday Saturday 02/05/2015 to postpone  trial of both: “Ahmed Maher al-Hindawi,” a student at the Faculty of Engineering Mansoura University, and “Moataz Bellah Ghanem”, a student at the Faculty of Commerce Mansoura University, in the case of the killing the son of Vice-president adviser “Mahmoud Muraai” who was killed in front of his home garage last September to session Wednesday 08/07/2015.

It is noteworthy that the security forces had arrested the student “Mo’taz Ghanem” from his home arbitrarily illegal without permission or a court order, and thats on Tuesday dawn , 07/10/2014, to be hid forced for 20 dayswere they  subjected them to the most kinds of torture – As stated in a letter sent by the student from his prison, which tells the details of his torture – to force him to confess to a certain charges, before being submitted to the General Prosecutor’s Office in November 2014, while the student was “Ahmed Maher”were arrested arbitrarily contrary to law, and that On Thursday 02/05/2015 from Cairo International Airport, where he also were subjected to enforced disappearance for two days, he suffered severe torture at the headquarters of the first section of Mansoura.
The public prosecution has accused the students several charges, notably: murder with premeditation, joining a ban  the group founded against law, possession of a weapon without a license, and then ordered to be taken to their cell pending investigations, and were referred yesterday to the criminal court.