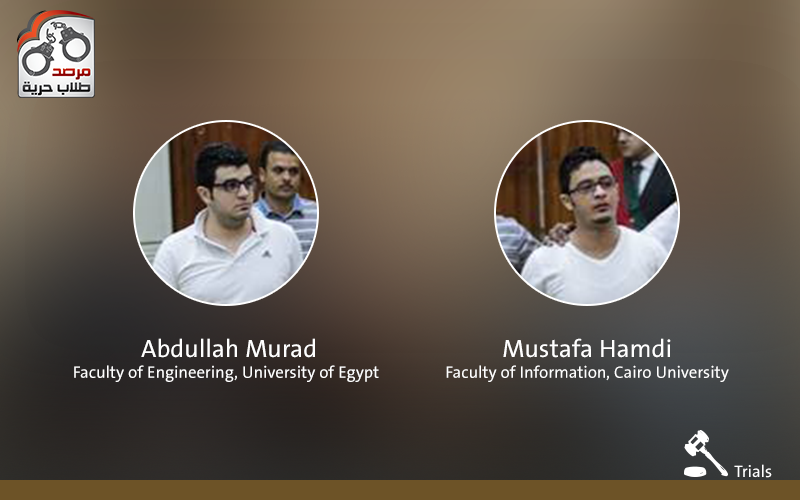 Giza Criminal Court, held at Central Security camp  Headed by Judge “Mohammed Naji Shehata” postponed the trial of both: “Abdullah Murad” student at the Faculty of Engineering University of Egypt, and “Mustapha Hamdi” student at the Faculty of Information, Cairo University, to the 28th June session to complete the defense hearing in the case.
Recalling that the two students have been arrested arbitrarily in violation of the law where 1st there was the arrest of the student, “Abdullah Murad” on 03/20/2014 , as for the second student, “Mustafa Hamdi” his arrest was from his home in 6 oct city on Day 23/3 / 2014, where the students were subjected to torture upon their arrest, in flagrant violation as provided for in the laws of the criminalization of any individual subjected to derogatory violations of his dignity even if he is a detainee.
Then they were presented before the public prosecutor who accused them of several charges including: burning Administrative Prosecution in 6 October City, also accused the student, “Mustafa Hamdi” in establishing Ultrus Rabia in 6th of October City, and then forwarded their case to the Criminal Court on the impact of those charges in the case no 3612 number to 2014.