After 16 days of Forced Disappearance.. Fears for her Health deterioration. 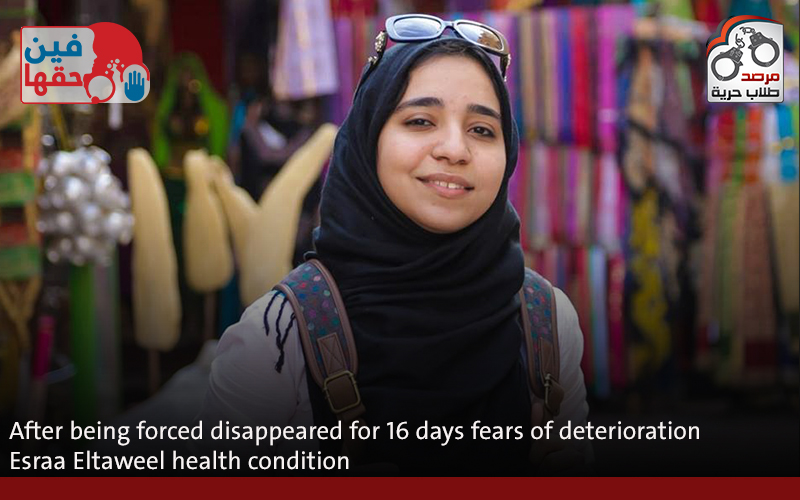 The suffering of the student started on the twenty-fifth of January causing the deficit and the inability to move and after conducting operations to help her move again, Israa health status is continuing to deteriorate due the prevention of her physiotherapy sessions and that during the month during her detention and her family is worried she might get paralyzed once again, as they said they dealt with those sessions since the year and a half and that helped improve her health.
States that On Monday, 06/01/2015, the security forces kidnapped “Israa El-taweel ” second year student at the Faculty of Arts, Cairo University, in front of the Corniche in Maadi, without permission or a court order, where the student was taken to an unknown location, also all attempts to search for them from their relatives in various places of detention failed, to show the student yesterday Wednesday, 17/06/2015 at the Supreme State Security Prosecution after more than two weeks of hiding.

on the eighteenth of this month, some of the media started talking about Israa Eltaweel Issue , saying that she was presented before a judicial source after her arrest directly and the public prosecutor, which is against the reality,  prompting one of the lawyers to denounce those words ,where came the Summary as: “Esraa defense team filed a complaint submitted to the General Attorney Office which carries No. 11191 petitions attorney general dated June 3, 2015 According to the Forced disappearance of Isra, and already has been transferred to the General Attorney  Prosecutions central in Cairo No. 1033 on June 7 and took the No. 1 060 Prosecutions central Cairo, and repeated communication with Public Prosecution day amid undeniable to Present the student, with the continued denial of prisons for her existence in any one of its prisons, and also added that one of the newspaper reported that one of the things taken from the student was a device “laptop” , which states that security forces took the laptop after storming her home at dawn on Thursday, June 18th 2015, after she was presented before the prosecution.

So the duration mentioned since her abduction to the first of June until the seventeenth of the same month, which exceeded two weeks contrary to the judicial source, and if that story was right why her relatives were not informed earlier  or during that period,  more doubts and questions about the legality and the risks that may face the student after an intervention on “Online TV” channel between the father of the student and Major General, “Abu Bakr Abdel-Karim” Assistant Interior Minister for public relations and the media eight days after her abduction, which said that he dosent have knowledge of the student arrest and if he has knowledge of her existence he will inform her relatives.

Furthermore , the student relatives stated that the student is suffering from her detention place she suffered from severe shortness of breath, because each cell contains more than 38 imprisoned and the spread of cigarettes and drugs, the student added that she was kidnapped in a”microbus” in front of the Chili’s in Sayeda Zeinab, which remained fifteen days blindfolded at the headquarters of the State Security in Lazoughly .

No specific charge is directed to the student, and the security services did not provide an explanation objectively about the reason for the student detained illegally for more than two weeks, not to mention her detention location is unknown in clear violation of all international and domestic laws, her display was postponed by the prosecution to  Sunday, 28/06/2015.