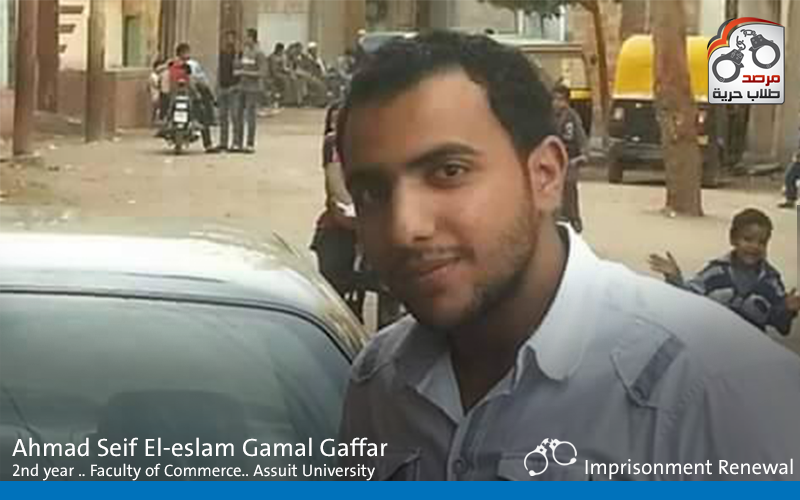 North of Assuit Prosecution decided on Tuesday 08/09/2015 to remain in custody, “Ahmed Seif al-Islam Jamal Jaafar” second year student at the Faculty of Commerce, Assiut University, for a period of 15 days on remand pending investigations.

The security forces had arrested the student from his home in Qusiya Assiut arbitrarily contrary to the law without permission or a court order reasoned, and that at dawn on Thursday, 25/06/2015, where he was taken to an undisclosed location to remain under enforced disappearance for 6 days, proved later that he was subjected to severe torture at the headquarters of the “state security” in Assiut, where proven student subjected to torture by systematic beating, lynching, and electrocution in various parts of the body with a device, which the effects appeared evident at the student body in the first show on the Public Prosecution .

Where students appeared for the first time since his disappearance on Wednesday 01/07/2015 to be viewed on the Public Prosecution, which has breached clear of the law while ignoring the crime of torture that took place against the student throughout the six days and that effects was clear on his body during the presentation of the prosecution, where the students were injured and number of bruises and burns was on a different parts of his body, which is what the public prosecutor did not investigate, but the prosecution directly accused him of several charges notably: bombing the booth Electricity behind Qusiya section, blow up three cars for a businessman in Qusiyah, and then remanded him in custody pending investigation.