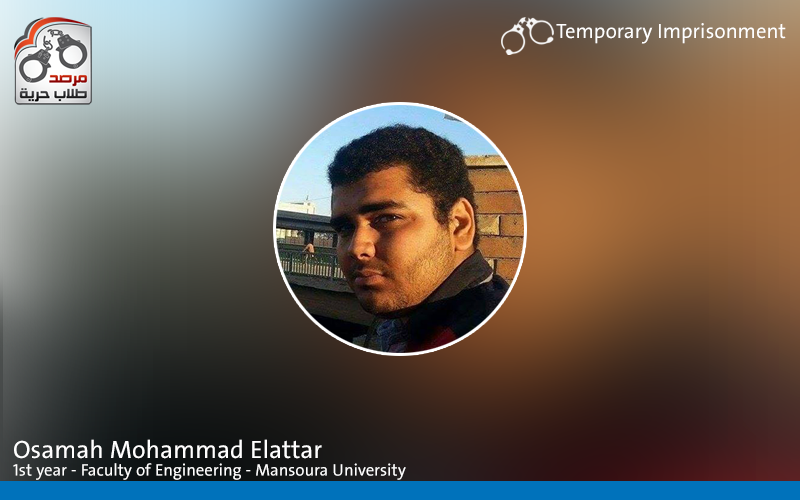 The public prosecutor in Mansoura decided on Thursday 19 /09/2015, to renew the  imprisonment for “Osama Mohammed Attar” first year student at the Faculty of Engineering, Mansoura University for a period of fifteen days of the charges against him, most notably the demonstration without a permit.

The security forces have arbitrarily arrested the student on Thursday, 08/27/2015, and then took him to an undisclosed location without informing any of his family or his lawyer, and forced hid him for 8 days before he was displayed before the prosecution yesterday.

It is worth mentioning that the student arrest and force hide came contrary to Article No. (54) of the current Egyptian constitution, which stated stipulating that “Personal freedom is a natural right, which shall not be touched, except in the case of flagrante delicto, no one may be arrested or searched, or detained, or freedom restricted except by a causal judicial warrant required by the investigation. “It also stipulates that” after someone arrest he should be immediately informed all the reasons for restricting his freedom and know his rights in writing, and can connect his family and his lawyer immediately, and to submit to the investigating authority during the twenty-four hours From time of his arrest, “in addition to the violation of Article No. (1) of the International Convention for the Protection of All Persons from Enforced Disappearances, which came stipulating that” no one shall be subjected to enforced disappearance. “