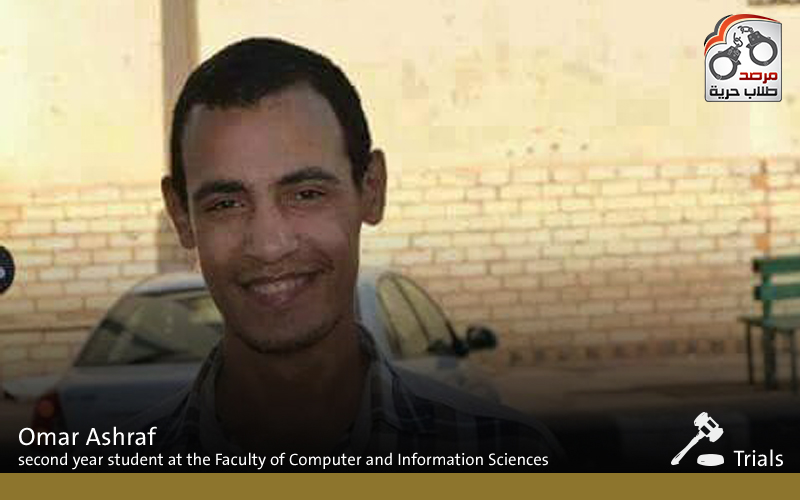 Military Court decided on Tuesday 30/09/2015 to postpone the military trial for”Omar Ashraf” second year student at the Faculty of Computer and Information Sciences at the University of Mansoura, for a week to be a trial session on Sunday 4/10/2015.

It is worth mentioning that the student had been abducted from campus after leaving the examination Hall on 16.06.2015 by security forces in civilian clothes in cooperation with the university security,then he was taken to an undisclosed location and was forced hidden for two days were he was exposed to torture , to be later presented before the General Prosecutor’s Office, which later accused him of several charges of belonging to an outlawed group, in Case No. 9975 of 2015 Mansoura felonies.

The student arbitrary arrest ,force disappearance and referral to a military trial all are flagrant violation of the laws and international conventions to which Egypt has signed and ratified, particularly as stated in Article 55 of the Egyptian Constitution and the current, which states that: “Every person who is either arrested, detained, or his freedom is restricted shall be treated in a manner that maintains his dignity. He/she may not be tortured, intimidated, coerced, or physically or morally harmed; and may not be seized or detained except in places designated for that purpose, which shall be adequate on human and health levels. The State shall cater for the needs of people with disability. Violating any of the aforementioned is a crime punished by Law. An accused has the right to remain silent. Every statement proved to be made by a detainee under any of the foregoing actions, or threat thereof, shall be disregarded and not be relied upon”

Furthermore, the student Referral to the Military Court came as a Violation of article 97 of the Egyptian constitution which states: ” Litigation is a right that is safeguarded and an inalienable right for all. The State shall guarantee the accessibility of judicature for litigants and rapid adjudication on cases. It is prohibited to immunize any administrative act or decision from judicial review. No person may be tried except before the ordinary judge. Exceptional courts are prohibited”