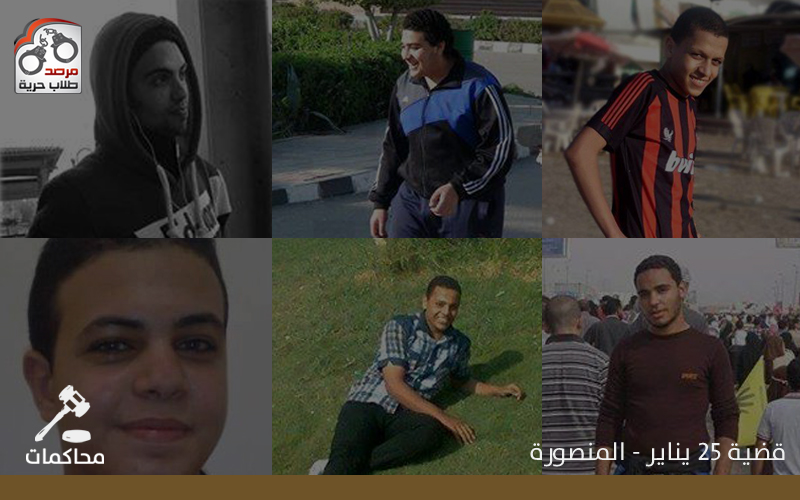 The Court of Cessation ruled in Mansoura on Tuesday 13/10/2015 to postpone the trial of seven people, including six students, to the session on Tuesday, 15/12/2015, The names of the students and their data came as follows:

1-Amr Abdel Aal.
2-Mohammed Saber.
And the students who has the right to be released:
3-Ahmed Abdul Majeed Elmtwaly – Arabic Language Department of history and civilization.
4-Khaled Elsayed El-ashary – Mansoura Engineering.
5-Magdi Mahmoud Shabrawi – Commercial Studies technician.
6-Asem Mahmoud Abdul Hadi – third grade secondary.
7-Ahmed Gomaa ElDesoki – third grade secondary.
8-Ahmed Shawki ElDesoki – third grade secondary.
9-Mohamed Abdullahi Yusuf.
states that the students were arrested randomly from one of the streets in Mansoura on 25 January last year, and held at the first Mansoura Department, to begin with then deported trip between “Gamasa, then the public Mansoura prison, and then burj alarab prisons  after being sentenced from Mansoura Criminal Court on 23 June last for years imprisonment ranging from three and 10 years, totaling 136 years, on charges in case No. 706 for the year 2014 the first No. 88 of 2014, in the case of having the intention to demonstrate.