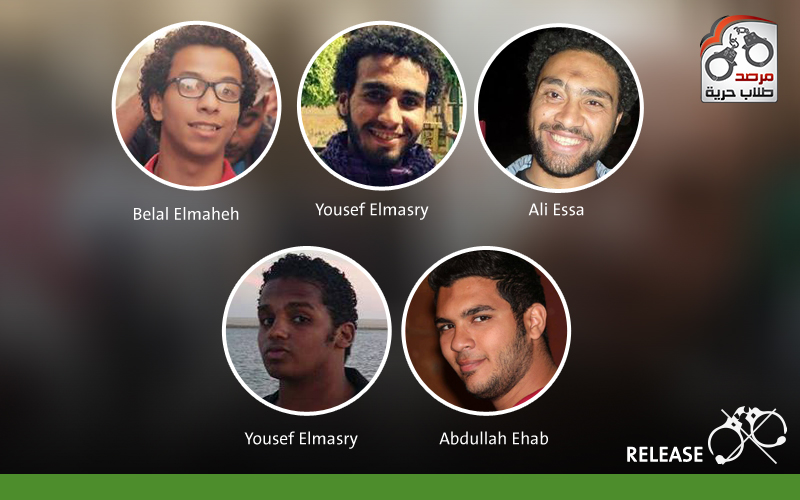 In the presence of the Observatory lawyer, the Criminal Court assembled in South Giza decided on Sunday, 10.25.2015 the release for  five students at the University of Cairo, after the arrest for more than seven months, and the names of the students were as follows:

It was mentioned that the students were arrested from inside the Cairo University Campus after clashes which happened on Sunday 19th April, 2015, between the students and tge security forces who broke the campus down. These clashes resulted in the murder of the student Anas Elmahdi, who is enrolled in faculty of physical therapy, Cairo University. The students were led to Giza police station, where they were presented before to the main persecution, whom accused them of many charges including; assault on the administrative security individuals of Cairo University, causing damages to the university’s buildings. After that, the main persecution ordered to put the students in jail under investigations, 11 of them were released while the persecution kept the others.

The students’ detention came as a violation of subject number 73 of the current constitution, which states that “Citizens have the right to organize general meetings, demonstrations, processions and any kind of peaceful protest, with a previous notification on a way follows the law without holding any kind of weapons; they also has the right to organize a private meeting with no need to a previous notification, without being watched, attended or listened by security individuals. “