Falls on Wednesday, the twenty-fifth of November, the International Day for the Elimination of Violence against Women, or “orange day” as launched by the United Nations, and at a time when the activities and events are held around the world to support women’s rights and the rejection of forms of violence against women, we find that the Egyptian state in its various institutions, instead of keeping up international efforts to stop violence against women, we find the continuing to exercise various forms of violence and flagrant violations against the right of female students, where we Observatory of “freedom seekers” during the last period monitored and documented hundreds of cases of students exercised against them numerous violations by the Egyptian authorities.

During the period between the third of July 2013 and the first of November, within 28 months only, we have monitored the number (319) cases of arbitrary arrest against Students whom were against the current regime in various governorates of the Republic, in addition to the number ( 6) cases of murder outside the framework of law as a result of excessive use of violence by Egyptian security forces to break up demonstrations, we also been monitoring (424) cases that were deprived of their right of education by being dismissed from universities or denial of performance exams, also (23) student suffered of the crime of enforced disappearance for varying periods, and that – for the first time – has referred a number (6) students to the military judiciary against the charge of exercising their right to express their opinion, by demonstrating against the regime.

At the time of issuance of this article, there are still violations and repressive practices exercised by the Egyptian authorities against the students, even the moment, is still (24) student under arbitrary detention without charges or fault or even a warrant of arrest, but only charged of experiencing their opinion or opposing the regime, where are detained in the Egyptian prisons in inhumane detention as well as being illegal, and in addition to that, exercising against them cruel transactions and degrading treatment, and in spite of those bad conditions, there are other female subjected to more serious crimes, even to the present moment, two female students are still under enforced disappearances after being arrested by the security services and took them to an unknown destination to their relatives or their lawyers until the moment, in a crude violation of all international and domestic, including the Egyptian Constitution  which criminalized all violations in the explicit provisions of the laws. 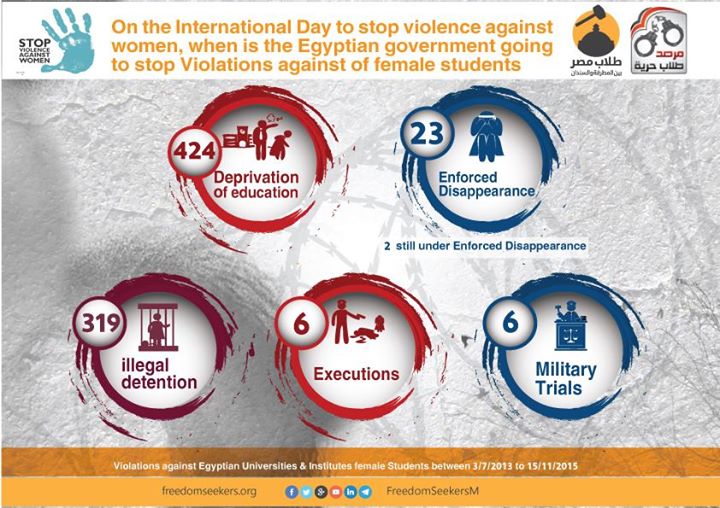 For our part, we “freedom Seekers” Observatory emphasize of the full condemnation of what has been and still against female students in Egypt of forms of excessive violence exercised by the Egyptian state without taking notice of international or domestic laws, also emphasize the seriousness of those practices and their negative effects on the Egyptian women, which in turn, affects the whole community, and here, we call upon the United Nations and international and local human rights organizations and the National Council for Women to unite and work hard to stop the violations and to require the Egyptian authorities to apply the laws and to hold accountable the perpetrators of such violations, as stress at the same time the continuation of our quest to monitor and detect all violations against students in Egyptian universities and institutes, and make all efforts to stop them.