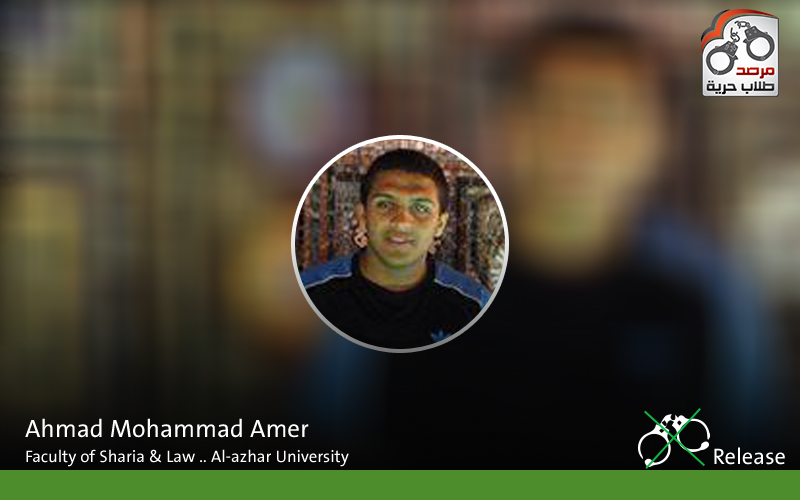 Damanhour court ruled on Saturday 21/11/2015 the release of “Ahmed Mohammed Amer” first year student at the Faculty of Sharia and Law at the University of Damanhur branch of Al-Azhar, and ensuring his place of residence.

It is noteworthy that the security forces had arrested the student on Thursday, 29.10.2015 arbitrarily against the law without permission or a court order from the street after a demonstration , then were presented to the prosecution the next day, 30/10, then was shown again on 31 / 10, then the prosecutors ruled his detention for a period of fifteen days pending investigations, and on the back of being accused of several charges, including: demonstration without a permit, joining a banned group, possession of firearms, working to disrupt the provisions of the Constitution, cut roads, and incitement to overthrow the government .

He was held out at Damanhour court ruled on Saturday his release on the ensure of his place of residence, and came out on Sunday, 11/22/2015, the students arbitrary arrest and force disappearance  both are flagrant violation of the laws and international conventions to which Egypt has signed and ratified, particularly as stated in Article 55 of the Egyptian Constitution and the current, which states that: “Every person who is either arrested, detained, or his freedom is restricted shall be treated in a manner that maintains his dignity. He/she may not be tortured, intimidated, coerced, or physically or morally harmed; and may not be seized or detained except in places designated for that purpose, which shall be adequate on human and health levels. The State shall cater for the needs of people with disability. Violating any of the aforementioned is a crime punished by Law. An accused has the right to remain silent. Every statement proved to be made by a detainee under any of the foregoing actions, or threat thereof, shall be disregarded and not be relied upon”