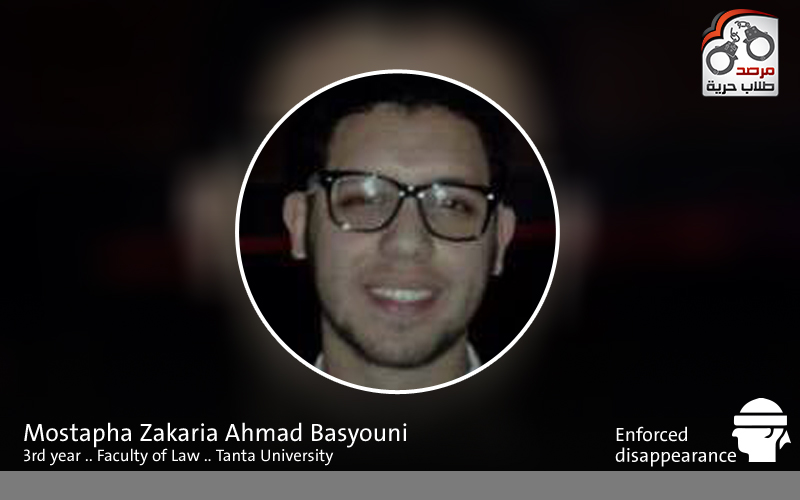 Security forces continue to hide the student  “Mustafa Zakaria Ahmed Bassiouni”3rd year student at the Faculty of Law, University of Tanta for almost a month , the forces Security at dawn on Wednesday, 09/10/2015 kidnapped him from his home and took him to Mahalla al-Kubra department for interrogation with the denial of his presence there, in violation of an explicit to all local and international human rights laws, to enter his 50th day in enforced disappearance.

This is the 2nd time to arrest the student, where he was arrested for the first time in December 2013 on charges of disturbing the peace and public security and incitement to protest , as he was released two weeks after his arrest on bail, the student arbitrary arrest and force disappearance  both are flagrant violation of the laws and international conventions to which Egypt has signed and ratified, particularly as stated in Article 55 of the Egyptian Constitution and the current, which states that: “Every person who is either arrested, detained, or his freedom is restricted shall be treated in a manner that maintains his dignity. He/she may not be tortured, intimidated, coerced, or physically or morally harmed; and may not be seized or detained except in places designated for that purpose, which shall be adequate on human and health levels. The State shall cater for the needs of people with disability. Violating any of the aforementioned is a crime punished by Law. An accused has the right to remain silent. Every statement proved to be made by a detainee under any of the foregoing actions, or threat thereof, shall be disregarded and not be relied upon”

As well as article 54 which states: ” Personal freedom is a natural right, shall be protected and may not be infringed upon. Except for the case of being caught in flagrante delicto, it is not permissible to arrest, search, detain, or restrict the freedom of anyone in any way except by virtue of a reasoned judicial order that was required in the context of an investigation, every person whose freedom is restricted shall be immediately notified of the reasons therefore; shall be informed of his/her rights in writing; shall be immediately enabled to contact his/her relatives and lawyer; and shall be brought before the investigation authority within twenty four (24) hours as of the time of restricting his/her free