Info-graph of Violations against Egyptian Students In 2015 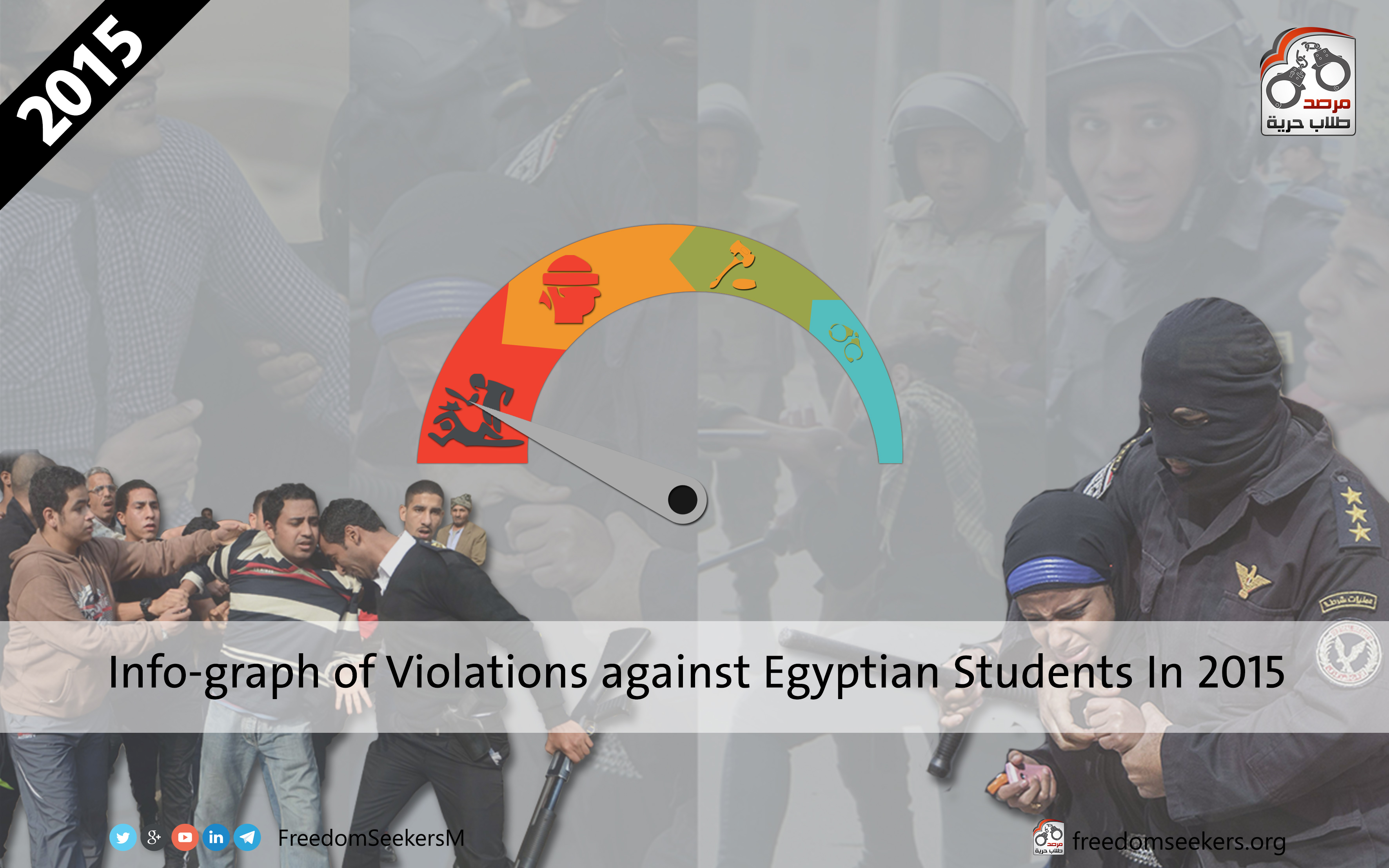 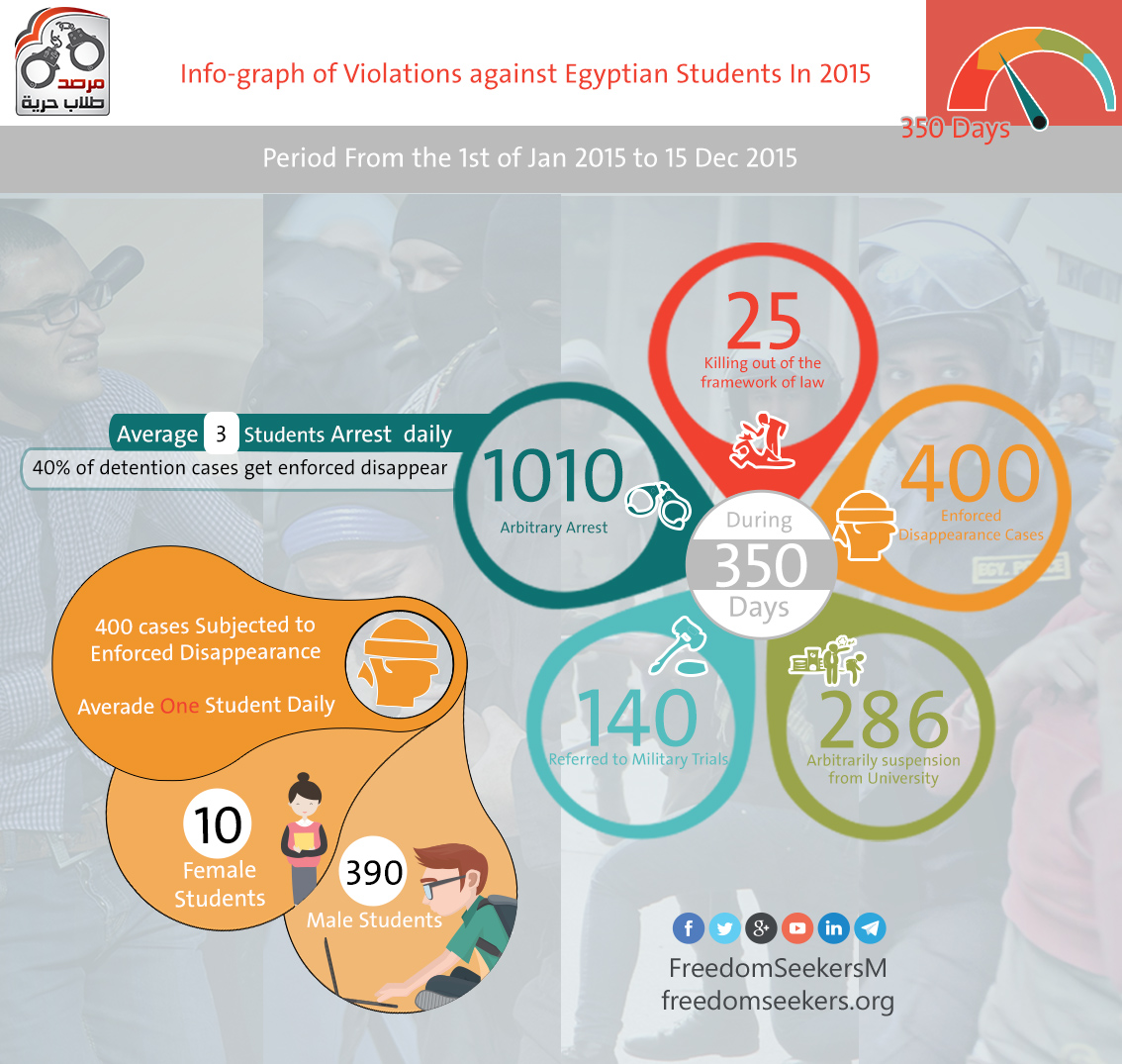 We at “freedom seekers” observatory – we monitored through 2015 only –  the number (24) murders outside the framework of the law against the Egyptian institutes and university students at the hands of the security services,

– As for the arbitrary detention, we have been able to monitor the number (1010) arbitrarily arrested without a warrant for students in Egyptian universities and institutes, the average number of (3) arrests daily, as spotted exposure approximately (39.6%) of the students who were arrested of the crime of enforced disappearance.

As for the students at Damanhour University’s reached 14 students, and the number of students from Damietta University reached (11)  students, while the number of Tanta University Students were (18) students, as the number of students from Kafr el-Sheikh University are (16), student, and finally reached The number of students from Al-Azhar University to (277) students – by “27.4% of the total students who have been subjected to arbitrary arrest during 2015.
– Among students who were arrested arbitrarily, we at Observatory of “freedom seekers” monitored the number (140) students who have been referred to military trial, by the number of (134) students, and the number of (6) students, in flagrant violation of Article No. (14) of International Covenant on Civil and Political Rights, which Egypt has signed on , pledging to abide by its terms.
– In spite of the criminalization in all international conventions on exposing anyone to enforced disappearance under any circumstances, we have been able to monitor a large number of enforced disappearances against students in Egyptian universities and institutes, reaching what we have monitored the number (400) The crime of enforced disappearances, by number (390) case against male students, and the number (10) cases against female students – “with a  crime of enforced disappearance daily on an average scale.”
– We were also able at the observatory of “freedom seekers” to monitor the number (286) decision of an administrative separation of pre-university departments throughout the Republic against the right to students of Egyptian universities and institutes, arbitrarily against the their of views of political and ideological affiliations, in the longer blatantly on their right to learn, and their right to embrace ideas and freedom of expression, which are guaranteed rights in the international conventions and even in the Egyptian Constitution.

At the conclusion of this presentation, and with the continuation of the repressive policies made known by the Egyptian state apparatus, we Observatory of “freedom seekers,” We emphasize our condemnation of such violations because of the clear violation of international and domestic law and is a flagrant on freedom of thought, opinion and expression, as well as to the result of repression and restriction to any form of criticism or opposition to the regime, which could boost the case of division within the community college students and raise their sense of hostility towards the state, and therefore the consequences.
So our recommendations came as follows:
First: the release of all detained students arbitrarily on charges of their political opinion.
Second: open a serious and extensive investigations into the killings outside the law and the right of students and to hold those accountable involved by bringing them to a neutral and fair trials.
Third:  the speed of detection of places of detention for students forcibly disappeared by the security services, and to release them, or display before the competent investigating bodies and then only if they are found committed to be punishable.
Fourth: the abolition of all military trials of civilians and refer them to the normal civil courts.
Fifth: requiring university administrations to issue decisions arbitrarily return of the dismissed students to the classroom.