Postponing the trial of three college students to next march 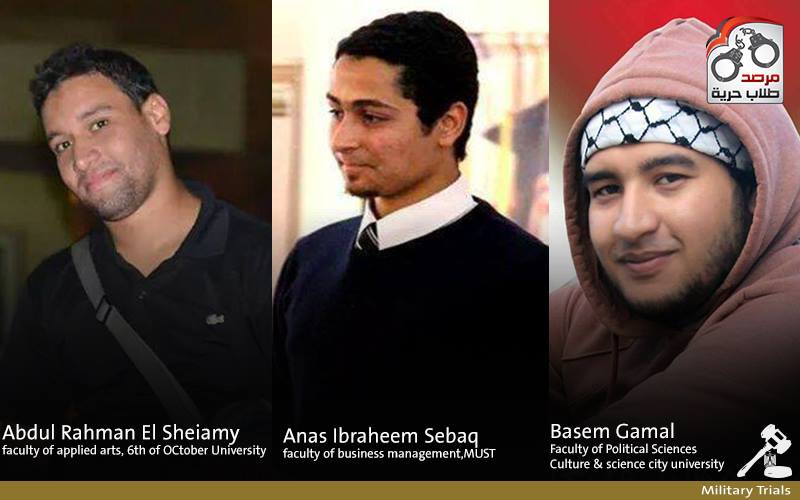 Military Court on Wednesday, February 24th 2016 decided to postpone the trial of each of the “Anas Ibrahim Sabbaq”, the student at the fourth stage of business administration, MUST University, “Abdulrahman Elsheimi”, third stage of Applied Arts, 6th of October University and “Bassem Jamal”. the student at the faculty of economical and political sciences at Culture and Sciences City, to 29.12.2015 in the case which is known as “the Unidentified” number 187/2015, military crimes, west Cairo; in which they are accused of spreading chaos and causing damage to the state’s buildings, targeting the private and public foundations and possessions, preparing weapons and explosives and monitoring the the targeted characters and buildings.

It was mentioned that the two students “Anas Sabaq” and “Abdulrahman El-Sheimi” were arbitrary detained from their houses on 14/11/2015 and they were kept in Elharam police station where some news leaked that they were being tortured before they were exposed to the main persecution and renewing their temporary imprisonment many times, while the student “Basim Jamal” was detained on 8/5/2015, and then They were turned to the military trial on 21/7/2015.

It is noteworthy that what was done against student from from violations arrest them arbitrarily, and subjected to cruel torture and cruel transaction is flagrant violation of the law, but it is a crime to be punished those involved with in accordance with Article No. (52) of the current Egyptian constitution, which states that “torture in all its forms and manifestations, is a crime no statute of limitations, “as the decision referred to the military judiciary was in violation of Article 10 of the Universal Declaration of human rights which states that” everyone is entitled in full equality with others, in a hearing before the independent and impartial tribunal “.