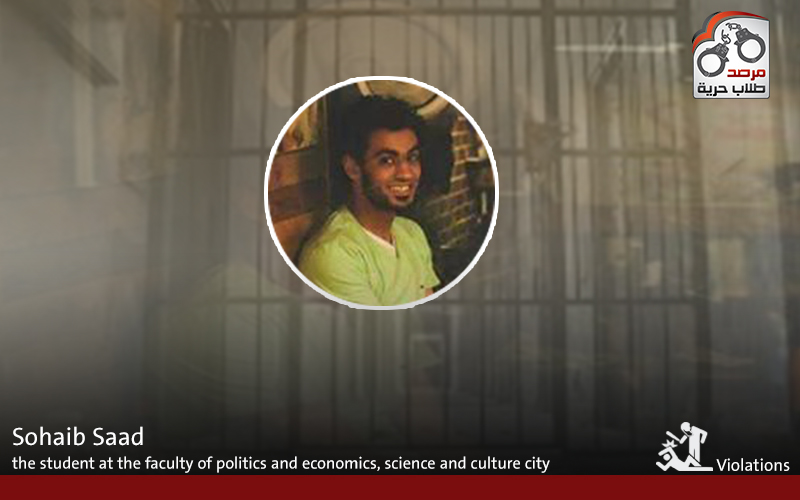 “Sohaib Saad Mohamed Mohamed Haddad” Third year student at the Faculty of Economics and Political Science in culture and science city exposed to verbal and physical abuse from security personnel at the heavily guarded Prison 2, ended by his detention in dungeon discipline for a while before deported him abruptly to the headquarters of Tora prison.

The student has sent a message from his prison, which stated that on Tuesday, February 16, 2016 the officer, “Mustafa Gamal” – one of the prison officers who hit him to the ground, and when the student protest and asked why he was attacked,the officer replied, saying, “it is my temperament!” and then made order to number of informers prison snatching the student to a disciplinary cell and which are not available with any of the conditions of detention Adamic as well as legal, according to a student in his letter he has been detained in a dark room,water was cut off and without providing any food or drink to him,and the student added on his letter that he was subjected during his detention discipline to cruel, cruel transactions and degrading treatment,verbal abuse abusive addition insulted his mother,and a number of detectives beat him severely in addition to threatening him by commit a crime of torture against him, and so according to the message of the student, which stated that a detective who assaulted him threatened him, said, “we will crush your neck by shoes and restrict you in iron.”

Stating that the student arrested and disappeared in the beginning of January 2014, he was first taken to Al Mokattam police office then he was led to an unknown place for 3 days in row,where he tortured and beaten to confess that he works for Al Jazeera network,and then he was appeared in the public prosecution,where he was accused of many charges including;
joining a banned group, preventing the government from doing its jobs,violation of the citizens’ personal freedom, targeting the public foundations, doing damage to the national unity and the social peace and putting the social safety on the line,in what was known as Marriot cell in media. After that, he was moved to the strictly guarded prison ‘Alaqrab’ (the scorpion),Where he was held in pretrial detention continued even he was referred to the criminal court which ruled on Monday,June 23, 2014 by rigorous imprisonment for 5 years against the student,however, and following the acceptance of Cassation on governance, the Cairo Criminal Court decided to release the student pending the outcome of the case and to ensure the place of residence and that on Saturday, February 21, 2015.
On Sunday, June 1, 2015 The student was arrested again Corniche Maadi, Cairo area exposed again for the crime of enforced disappearance, where he was taken to an unknown destination for a period for twelve consecutive days, the student said later,during one of the trial sessions,that he remained throughout that term blindfolded eyes and restricted in the rear,and subjected to restrict torture and electrocution,until it was his first appearance at the “Tora” prison to be charged in the case that known in the media as the “Advanced processes”, which has a transmission to the military justice system, as has been initiated in the completion of his trial in the case of ” Marriot cell” which was issued for him in a presidential amnesty on the eve of Eid al-Adha corresponding, Wednesday, September 23, 2015, and continues the student detention currently pending the issue of the “advanced” and has been in the postponement of his trial to the thirteenth of March.