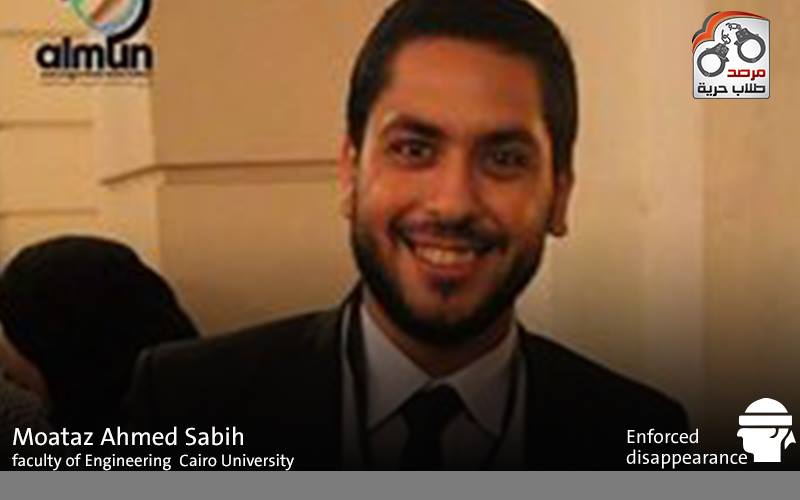 Continuing the policy security services under the current system of arbitrary arrest followed by enforced disappearance to the students, security forces continue to hide the place of detention of “Moataz Ahmed Mohammed Hassan Sabih” student first year at the Faculty of Engineering, Cairo University, since the storming his house on the afternoon of Wednesday, 01.06.2016,and arrest arbitrarily against the law without a court order,Where six armed personnel dressed in civilian clothes told the mother of the student that they are members of the Nasr city security apparatus,they – according to the testimony of the mother of the student – broke into the house and searched without permission, as they break down its contents, as well as the theft of a computer,tablet, camera and mobile phone, and then snatching the student to an unknown destination, and in spite of the relatives of the student submit a number of telegraphs and notifications about the disappearance of the student, but they were unable to identify his whereabouts or fate until the present moment.

It is noteworthy that what is done against the student is a violation of articles No. (54) and (58) of the Egyptian Constitution, which reported the first text criminalizes of sentimental to the arrest of any person arbitrarily without a reasoned judicial order, The second criminalized break into any house, searched it without a warrant except in cases of danger or distress and by the knowledge of the home owners,and the article No.(9) of the International Covenant on Civil and Political Rights and emphasized the inadmissibility of arbitrary arrest or detention of any person without legal permission to do so, and also criminalized all international and local laws, the legal detention of any person without presentation to the point of achieving a competent, which is stated, for example, text Article I of the international Convention for the Protection of All persons from enforced disappearances, which reportedly stipulating that “no one shall be subjected to enforced disappearance under any circumstances.”.