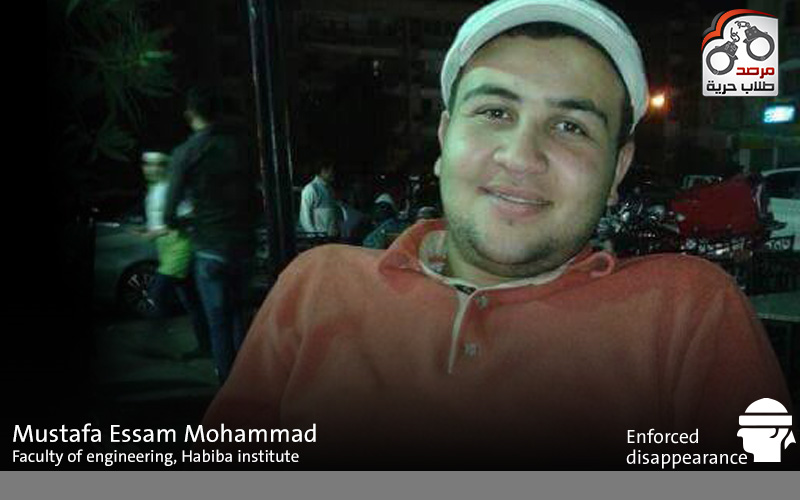 Egyptian security forces on the third of March arrested, “Mustafa Essam Mohamed” second year student at the electrical engineering and communications department at the Higher Institute of Engineering and Technology Sixth of October City (Habiba Institute), and then the security forces hide him in an unknown place to any of his family or his lawyer, where he was held for 23 days consecutively.
The student’s sister said that her brother disappeared since thursday morning, March 3, 2016, according to a factor in the repair shop “car mechanic” that the student had leaved his car in front of his shop the day in question morning, and then the news of the student was cut off, while his sister reported that at three o’clock on dawn on the fourth of March came to them a call from a person who claimed that he is a police captain and told them that he knew where the student detention and also asking them about the political affiliations of the student, but he did not say any information about the student’s whereabouts.
The student’s sister added that they heard news about the detention of her brother at the headquarters of the state security apparatus in Lazoghli, however, when they asked about him the security forces denied that they detained him, prompting his family to send Telegraphs to the prosecutor and the public lawyer and the sister of the student confirmed that it met with negligence and not taking any legal action on disclosure of the whereabouts of her brother, and the student’s family made it clear that they suffer from severe materialism and psychological difficulties following his arrest because he was the only breadwinner for them.