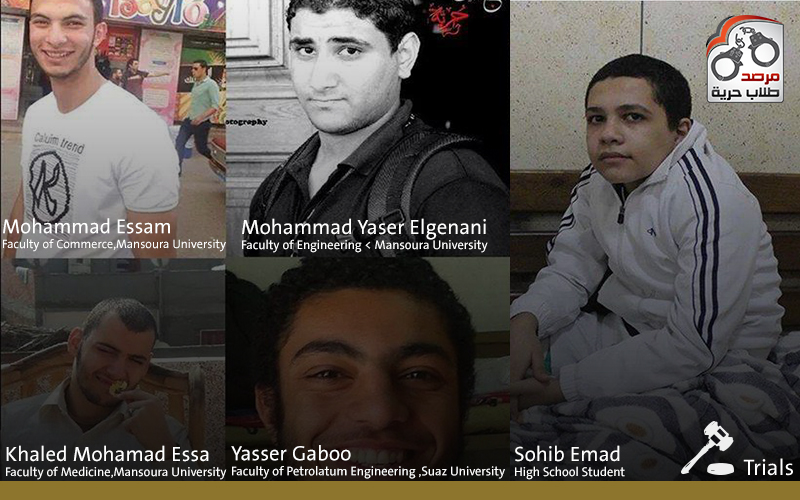 Mansoura Criminal Court decided on Sunday 04/10/2015 to postpone the trial of four undergraduate students and another high school, to the 2nd of November session , in the case Known in the as media “the terrorist cells” and 41 is accused in that case, and their data came as follows:

1) Khalid Mohamed Ahmed Issa -Faculty of Medicine student  who was arrested from his home on February 18, 2014.
2) Mohammed Yasser Ganayni –  Faculty of Engineering student who was arrested from his home on March 1, 2014.
3) Mohammed Essam – Faculty of Commerce student who was arrested from the streets of Mansoura on May 4, 2014.
And all are enrolled at the University of Mansoura.
4) Yasser Ghabour – Faculty of Petroleum Engineering student at the University of Suez, and who was arrested from his home on May 23, 2015
5) Suhaib Imad – a high school student, who was arrested on February 11, 2014.
The student “Suhaib Imad” has been subjected to a series of violations despite his young age, and was detained in inappropriate conditions and subjected to torture, which led to the injury as “rheumatism” and needed a surgical operation in his knee during the month of December last year, although he suffered of severe pain, he was transferred to the department without completing his treatment in the hospital.
It is worth mentioning that all the students have been subjected to a systematic campaign of psychological pressure and physical torture inside Police Department detention at second Mansoura Station, to force them to confess to several charges including: setting fire to a car belonging to the police, possession of firearm (individual cartridges) without a license, possession of tools used in the attack the people ,which lead to their detention before being viewed before the public prosecution ..