For the third time .. security agencies forced disappearances of “Sameh Barakat” student at the University of Assiut after a decision to release him. 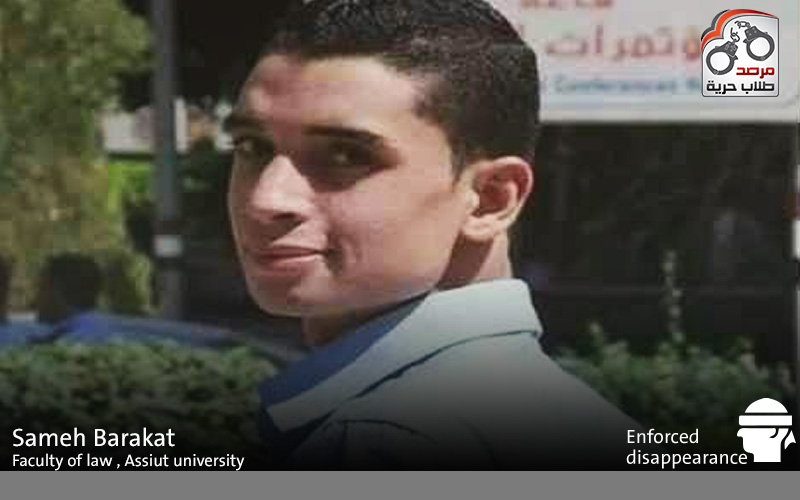 Although issuance of a decision to release him on Wednesday 02/03/2016, the Egyptian security forces are continuing to hide the place of detention, “Sameh Ahmed Mohammed,” third year student at the Faculty of Law, Assiut University,for the sixth day respectively since being taken in the following Thursday after that decision to the headquarters of the National Security apparatus in Assiut.Student’s family and his lawyer unable to identify his whereabouts or fate from that day until this moment.
It worth mentioning that the student since his emerged in public prosecution and during his detention by the security forces suffered from torture, physical and Psychological harm and forms of illegal violated the articles of the Declaration of Human Rights and the Egyptian laws and other international laws.The most prominent of those practices what we received in January from the student that he was exposed to repeatedly beaten during the examination period by a security personnel in the second department station in Assiut, where the headquarters of detention and who told him a text: “you will never succeed”, which ultimately led to the student refrain from the examinations in order to avoid such practices.
Stating that these violations and arbitrary practices that have been and remain practiced against the student beginning from arbitrary arrest and then hide him forcibly for the fourth time, as well as exposure to the torture and cruel transactions, all of that was contrary blatantly to all international conventions and Egyptian laws, even if the article number (52) of the Egyptian Constitution stipulates that torture in all its forms offense no statute of limitations and punishable, and the suffering of the student from enforced disappearances after being detained arbitrarily is a violation of provisions of the “International Convention for the Protection of All Persons from Enforced Disappearance in its first article, which stipulates that: “No one shall be subjected to enforced disappearance, and may not be invoked in any exceptional circumstance it was, whether a state of war or a threat of war, internal political instability or any other public emergency to justify enforced disappearances.”
That all of us in “Freedom students Observator,emphasize the full condemnation for all what done by security services of the Egyptian authorities of repressive practices as well as being illegal the right of the students, as we reiterate our call for the authorities concerned to quickly reveal where students capture and brought before the investigation authority, also call immediate release unless evidence proves that they committed reprehensible, and we hold the Egyptian authorities have full responsibility for their personal safety.