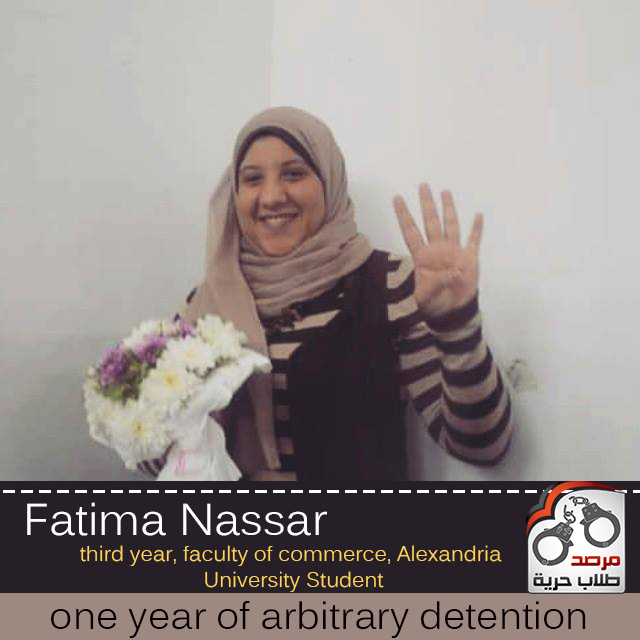 The ninth article of the Universal declaration for human rights stated that “No one shall be subjected to arbitrary arrest, detention or exile” 1. That was exactly what the security forces and institutions had violated when they arrested Fatimah Nassar , a student in the third year, faculty of commerce, Alexandria University. Now she has completed her first year in prison as she was arrested during helping one of the injured people who was also injured by security forces fire during their attack to one of the anti current regime. She was retained in the deportation prison for men for 7 months before she is sent away to AlAbaadeya high-security prison in Damanhour where she has been for 5 months now. Her imprisonment gets renewed continuously and the prosecution insists to investigate at 3:00 am all the time.

Worth mentioning that Fatima was subject to beating and dragging the thing that violates all laws and conventions that considers torturing anyone during arresting a crime. Also worth mentioning that the prosecution addressed many charges to Fatimah such as killing Hajja Zeinab who was killed due to security forces attack to the student demonstration that Fatima was arrested from. Also, the prosecution addressed  other charges such as belonging to a legally banned group and terrifying people. These charges are documented in the case number 26116/1330 for 2014, Al Montazah felonies section that is supposed to be discussed on the 19/1/2015.

Fatima had sent a message from her prison on 16/11/2014 clarifying the medical maltreatment that she is receiving as well as she complained toothache and bone pains which is an add on violation to the series of violations committed by current regime against arrested students.