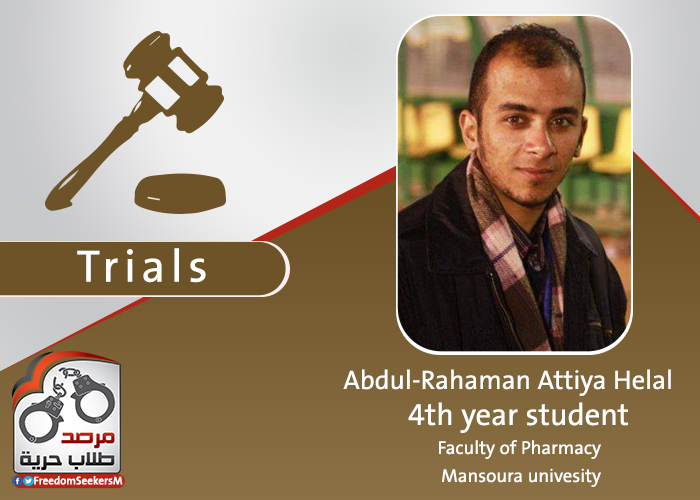 To postpone the trial of a student at the University of Mansoura to 15 March
– Criminal Court decided on Monday, 02/03/2015, to postpone the trial for “Abdul Rahman AttiaHilal Bayoumi ” fourth year student – Faculty of Pharmacy, University of Mansoura, to Sunday, 03.15.2015 session, in case No. 190 of 2014 South Mansoura.
It is noteworthy that the security forces have arrested the student arbitrarily from Cairo International Airport before traveling to visit his family last February, where forced hidden for 13 days, during which he was endured to many forms of abuse and torture, in the National Security headquarters in Cairo, and his health deteriorated during this period, which led to his diabetes, which violates all international conventions and laws that criminalize any detainee to endure torture or enforced disappearance during his arrest, where he was introduced after that to the prosecutor who charged him with offenses including: attempted murder of citizens, and targeting of security installations and armed forces, endangering the safety & security of the community , infiltrate into the Gaza Strip, received military courses at the hands of al-Qassam, and murder, “which converted him to a criminal court, later he was evacuated & deported to scorpion high secuity prison who is still detained so far, except for a period of hearings.