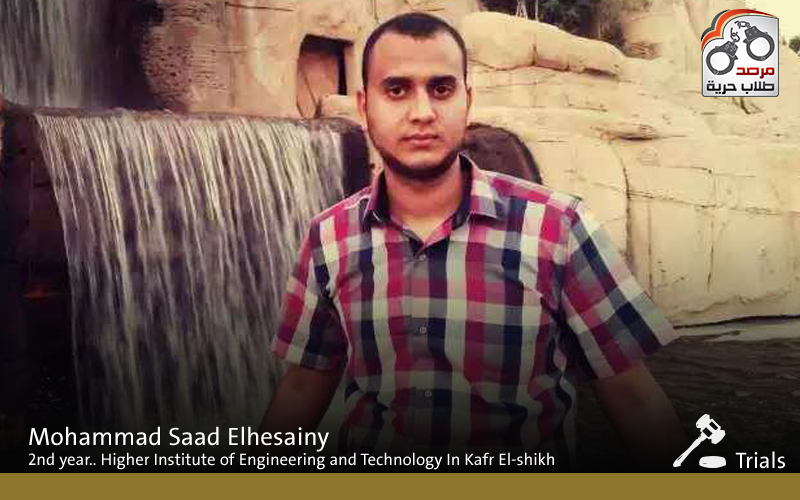 - Tanta criminal court decided in its meeting held on Sunday, 22-11-2015 to postpone the sentencing hearing against the student, “Mohamed Saad al-Husseini,” second year student at the Higher Institute of Engineering and Technology Kafr El-Sheikh, to Thursday  session , 11/26/2015, the same court has postponed the sentencing hearing at its meeting on 10/28/2015 to Sunday 11/15/2015 to hear the witness of one of the officers at the request of the student’s defense and also was unable to attend one of the defendants in the case.

It is worth mentioning that the student had been arrested arbitrarily after a demonstration against the current regime and opposed the =break up of Rabi’a Square set in on August 2013 and has been on behalf of Tanta renewed his detention for 9 months until he was released pending case on bail of 1,000 Egyptian pounds, his case then was referred to the criminal court, which sentenced him in absentia to life imprisonment, then on September 2015 he was arrested in a police ambush in Cairo, his trial then was retried , which is expected a verdict in them.

In a related context, the father of this student is engineer, “Saad al-Husseini,” the former governor of Kafr El-Sheikh, who was sentenced to death by hanging counting due to a series of trials doubtful impartiality due to his opposition of the ruling authorities in Egypt.